Today was great, even though my backs been killing me and I’m feeling really sluggish. I did my FIRST 3D PRINT ever, whoohoo. 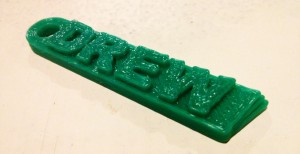 It’s a key chain with my name and phone number, cool hu?

We played WikiTrails where we went from Yu River (Guangxi) to Seven Deadly Sins. We ended by reading each sin. I really liked Sloth, it was believed to be the failure to utilize one’s talents and gifts.

Then I spoke with my friend in NYC who is attending hacker school and shared some of the Agile tools with him.

I worked with Mike on documenting the printer, named Jill. You can find that here.

I did some drawing too, here’s some process shot:

For our question we asked what do you want to do while Alex/Douglas are in town?

I want to jam with Alex on making a code level up system.

What are five things that you did today that use fossil fuel?