As part of my work with ALC Oahu I’ve taken on the task of upgrading and creating the physical tools used in the space. The first one I decided to take on was the creation of a Gameshifting Board. This board is a tool to make the implicit structure of group time into something more explicit. It’s generally used in meetings to help people see and—more importantly—change up the current structure of the meeting.

This post will go over what a gameshifting board is and how I went about designing and creating the one for ALC Oahu.

Let’s start by taking a look at the finished product: 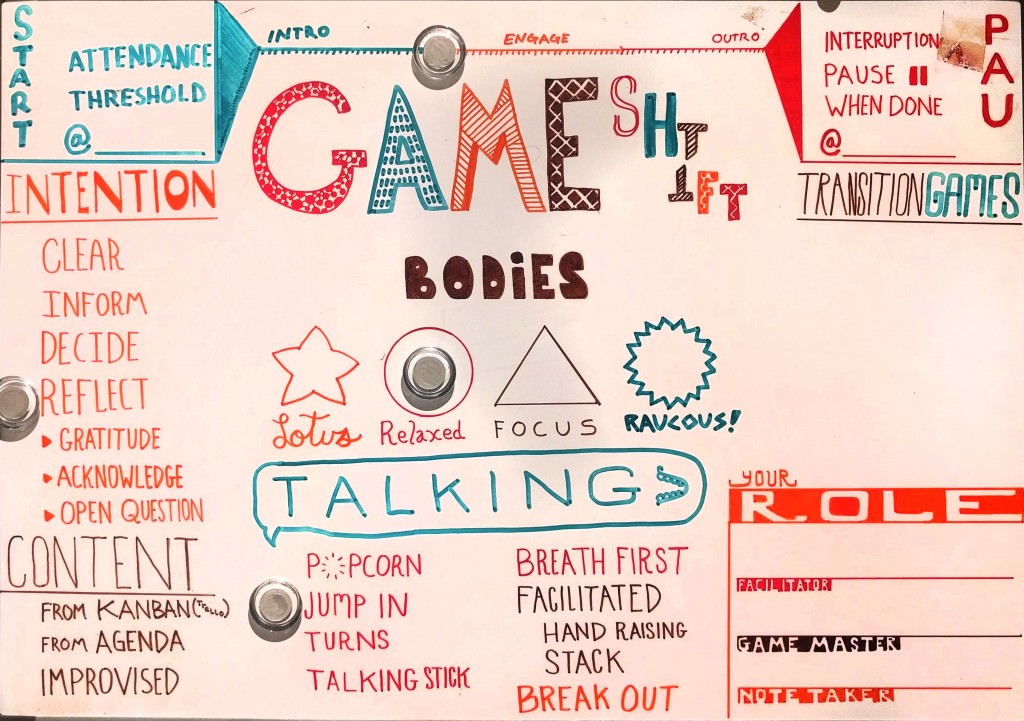 Each area has a number of settings which indicate the current state of the social rules. Typically when we interact with each other these social rules are implied. Imagine a typical group conversation, one person is talking and then when they finish another person will jump in with a follow up. The discussion will typically have an intention, perhaps the group is trying to decide on toppings for a pizza they plan to order or the group is reflecting on something that happened during the day. If a group is highly aware they will open space for quieter voice to speak and will stay on topic if there is a specific objective.

Often times, though, groups will get stuck in a particular manner of communicating that unintentionally exclude voices or railroad alternative views. It can be hard to change the style of communication in these unintentional conversations. This is where Gameshifting comes in.

When a meeting starts the participants will agree to use the Gameshifting board and select members of the groups to hold a few key roles. 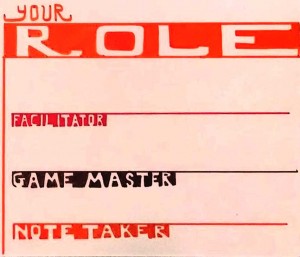 If needed a facilitator will be selected, they will guide the meeting and ensure it stays on the agreed upon topic.

Next a game master will be selected, this person will run the gameshifting board. Their job is to keep an eye on the group and adjust the board according to the current group dynamics, changing them if they think it is necessary or if someone requests a “change up”.

In some situations a note taker might be assigned to create a record of the meeting.

On this game shifting board there is space for names to be written in so that they are clear to everyone who is there and also—and this is key—to anyone who joins the meeting late. This is another reason making things explicit is good, because now the group doesn’t have to spend time bringing late comers up-to-speed around what’s going on! 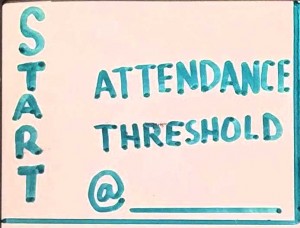 All meetings have a start but not all beginnings are the same.

The Oahu board has three options:

There are other possible options, one that I really like is penalties. Which means that if you come late there are consequences. I once participated in a daily meeting where if you were 10 minutes late you weren’t allowed to speak, because the team didn’t want to spend time having to catch late comers up. 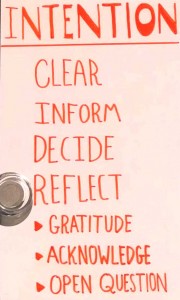 Most of the settings on the board are meant to be dynamic. For instance the intention of the meeting might change as the meeting moves along. It might start with inform and move to decide. For example while creating the gameshifting board I first informed the group what gameshifting was then we decided what to put on the board.

When making your own board consider what kind of meetings you’ll be having based on what kinds of meetings you have. Do you explore ideas in meetings? Perhaps you spend time clearing or inventing.

As the intentions of meetings shift it is up to the group to indicate the desired shift to the game master so that they can update the board. As you get better at using the gameshifting board you might not need to even assign a game master and simply let anyone adjust the board to reflect the current mood of the meeting. 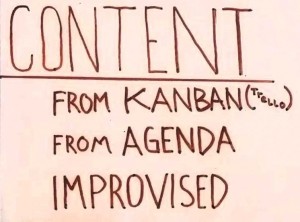 Knowing where the content of the meeting is going to come from is important. If the group isn’t clear where to pull the content from a meeting can wander, which isn’t always undesirable.

Oahu’s content comes from our Kanban (or Trello) during morning intention setting meetings. It might also come from a set agenda which helps keep meetings from wandering too much or we might simply improvise the content (go with the flow as they say). Setting the content lets the participants know what to expect.

How we position our bodies can influence our meetings in a significant way. Perhaps we are set to relaxed but find that energy is getting low with everyone comfortably sprawled out. The game master (or anyone) might see this and suggest that we sit up and focus on the meeting. Other times there might be lots of fidgeting and pent up energy distracting us from the task at hand. In this case setting to raucous and allowing participants to move around a bit will allow energy to escape so that the group’s bodies can return to focus or a mindful lotus (cross legged) position.

Body position can also aid in visualizing a group’s feelings on a particular question or topic. A fun arrangement called spectrum can achieve this, especially with a large group. Spectrum works by defining two opposite sides of the space as “strongly agree” and “strongly disagree” with the space in between representing a spectrum between these two extremes. A statement is made and the group positions themselves to physically represent how much they (dis)agree.

Agile practices often utilizes the standing meeting to keep people on their feet and thus reduce the time a meeting will take by keeping people in a higher energy position. 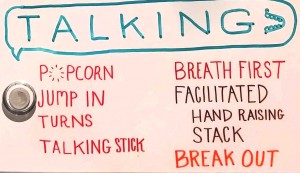 Talking is a key component in any meeting but if our style of speaking isn’t done in an intentional manner we can run into many of the problems I mentioned above. Let’s go through a few talking settings. Note that it is perfectly acceptable to “activate” multiple settings at once (like facilitated hand raising and breath first)

It is important that each person in the meeting feel empowered to suggest a change-up to how the group is setting the talking style. This will help keep the flow moving, maximise use of time, and create better equity of voices heard. 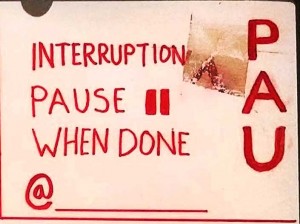 Finally every meeting must come to an end. By setting clear expectations about when a meeting will end members can modify how they participate accordingly.

You might have noticed a line connecting start and pau on the picture of Oahu’s board at the top of the post. This is a visual indicator of how far the meeting is along. The game master can move a magnet along this line to help make explicit how close the meeting is to being done.

Meetings often have multiple stages. In ALC Everett our morning meetings consisted of check-ins, personal intention setting, group intentions, and sharing intentions. To split up the meeting and maintain energy we would play a short game to transition to the next phase. I have not figured out what transition games to add the the Oahu board yet, I think it will have to wait til another blog post (maybe by @abram).

Creating the board started with a group meeting where we took a look at other gameshifting boards from around the network.

I mainly referenced @abram’s board he made for ALC Everett for its stylistic qualities. 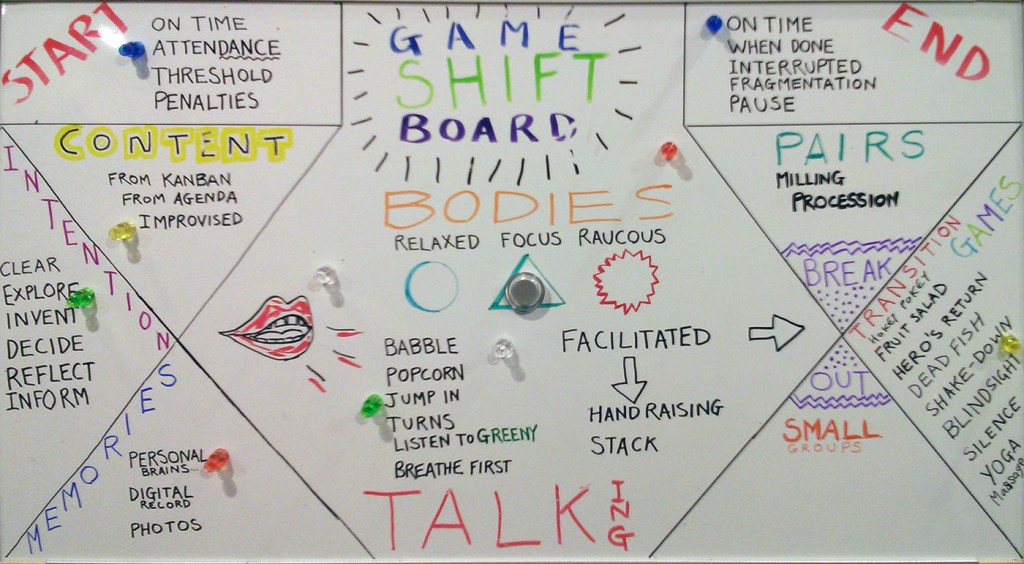 We determined which sections were relevant to Oahu and then what settings should be in each section. I felt that we didn’t need the memories section and @ninablanco borrowed the lotus body position from ALC NYC’s afternoon meeting board. As we were coming to agreement around the board I was sketching it out in dry erase marker on the whiteboard that was to become the final product. 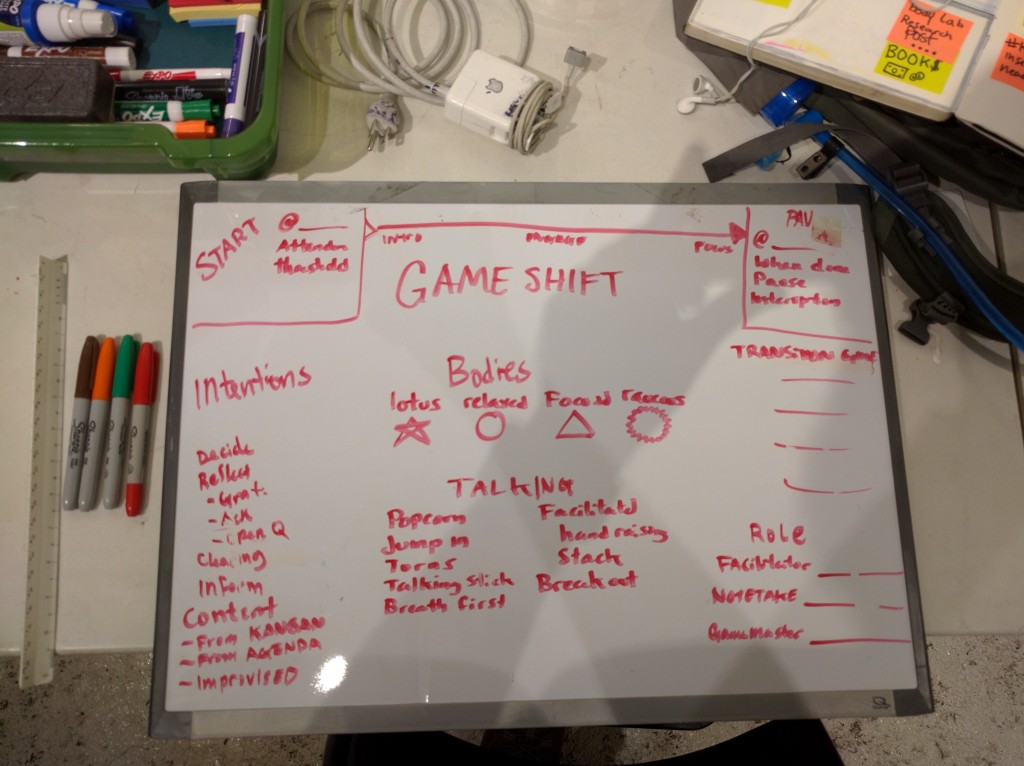 Once that was finished I took the above picture for reference and began erasing sections and drawing them with permanent marker.

Tip: you can erase permanent marker from a white board by drawing over it with dry erase marker then wiping it away!

Don’t forget to leave space for your movable markers so you can indicate what setting the board is on. Magnets work best but dry erase or scraps of sticky notes work great too!

I hope this inspires you to create awesome tools! What sections or settings do you think would be useful on your gameshifting board?