This weekend on the ALF Summer planning call we began talking about what the process for turning people into Agile Learning Facilitators (ALF) and how to establish schools as Agile Learning Centers (ALC).

This post will cover my ideas on these two subjects which are, in my mind, related. I’m going to focus on three ideas. Trademark and protecting the ALC “brand”, what an ALF is and what a process of “entitling” new ALFs should be, and the process for adding ALCs to our network.

At the core my feeling is that an ALF is simply an ALF if other ALFs say they are an ALF. Just as an ALC is an ALC because ALFs say it is an ALC.

Agile Learning Center: This is a school which is facilitated by an ALF using the ALC principles or accepted variations on those principles. An ALC can be a fully fledged school or a program within the context of a school or home school.

So, what if someone calls themselves an ALF or an ALC?

A trademark is any word, name, symbol, or design, or any combination thereof, used in commerce to identify and distinguish the goods of one manufacturer or seller from those of another and to indicate the source of the goods.

Anyone can slap a trademark on their word, name, symbol, or design and signal to others that “this design object is ours!” So it’s a bit like licking your cookie so no one else eats it. It doesn’t offer many protections (it would seem, I’m no expert).

Trademark does not protect the company from another company that produces a similar product or uses a similar name. If such a thing were to happen, the original company would have to prove that it produced the name or design first, but still may not have a legal defense without a registration.

So we could start writing Agile Learning Centers™ all over the place but it doesn’t stop Agile Learning Core from becoming a thing. It then puts it on us to lawyer up and prove we were ALC first and they are trying to be ALC. It seems like a fine idea, giving us a little bit of protection, but (and I’m not a lawyer) I think that we could litigate in that situation anyways, ™ symbol or no.

I’ve seen this first hand as a “member” of Occupy Wall Street. Recently a twitter handle that represents OWS, a out reach resource, was litigated over by people who believed themselves to be the more authentic controller of that brand asset. This is a clear break down of the agreement around who is and is not “Occupy”. This from a movement with “official” documents reading:

“The people who are working together to create this movement are its sole and mutual caretakers.  If you have chosen to devote resources to building this movement, especially your time and labor, then it is yours.”

Anyone could be “on the inside” of Occupy because anyone could simply start participating. ALC is in a similar situation. All of our knowledge is increasingly being documented to the point where someone could start an ALC all on their own. As such, our intention to make ALC open source becomes a means to fracture our network. All it would take is one divisive thing to break the whole network into factions. This is where I suspect the issue of trademark will enter: two factions of ALFs fighting over network resources such as the ALC brand, as opposed to someone from outside using the brand in a way that hurts us.

It is the use of these shared resources that make being accepted into the ALC network valuable. However the resources such as branding, which are easy to define and protect, are not the most valuable resource by far. It is the community of which you are a part which gives membership true value.

Therefore, the process of being accepted into the community holds much more importance than how to trademark and protect resources. I do think that developing a frame work for shared access to resources is an important process that needs to happen sooner than later, but it is outside the scope of this post.

In James P. Carse’s book Finite and Infinite Games he describes titles as somethings we win from playing finite games. Much like Steve Lombardozzi might have the title of “Winner of the1987 World Serise” for playing a finite game of baseball, so too does an ALF play some kind of game to become an ALF. It is our job as ALFs to figure out what that game is.

I want to avoid answering that question. I think that it will never be answered. Nor do I really think it should have an answer. The game will change as the players change.

My proposal is to create not a set of requirements, but a protocol or set of conditions to becoming an ALF. It’s actually pretty simple. To become an ALF an existing ALF invites you to be an ALF. 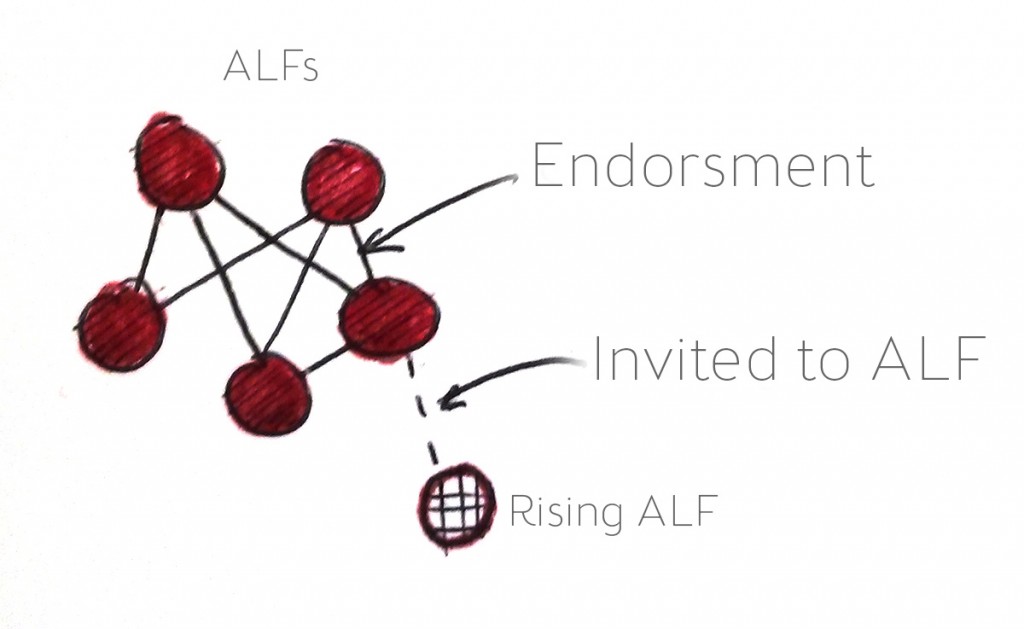 The invite comes in the form of an endorsement. Ryan endorses Abby and the process begins. Abby is now a rising ALF, she becomes an ALF once she receives a threshold of endorsements. More endorsements means a more reputable ALF.

Endorsements could come with caveats, such as keeping trial status of Rising ALF for a period of time. As we define the benefits of full membership the role of trial membership will come into focus.

A key to this process is the ability to update or remove endorsements from an ALF. This is a method of ostracism, which I believe to be a very important tool for any group. The word ostracize comes from the procedure under the Athenian democracy in which any citizen could be expelled from the city-state of Athens for ten years. There was no recourse because it wasn’t a punishment, it was simply a command from the community.

The tool of ostracism could be used to remove, even temporarily, an ALF who was working themselves sick or who needed space from the community. It is the ability to remove that I find most important from all of my experience with collective intentional groups.

This is the basis of my entire proposal. ALFs become ALFs when other ALFs endorse them (through a blog post perhaps). Negative endorsements are weighed against positive ones if there is contention around a rising ALF and those endorsements can then be updated to reflect changes in a situation.

We could then set conditions to access certain resources. For instance, to be listed as an ALF on the website you might need 5 positive endorsements and no more than 2 negative ones.

Through this process we can introduce Agile Learning Centers.

What Makes an ALC?

I think that it is the ALFs that make the ALC, because the ALC is a school facilitated by an ALF(s) using our principles and tools. So any school that an ALF is running can be assumed to be an ALC, because we wouldn’t endorse an ALF whom we wouldn’t trust to run an ALC.

It would be possible, and probably desirable, for ALFs to endorse ALCs like they endorse other ALFs.

Then similar conditions could be set for listing on the website along with other resources.

To tie this all together I’ve drawn a diagram of how I see the ALC network right now: 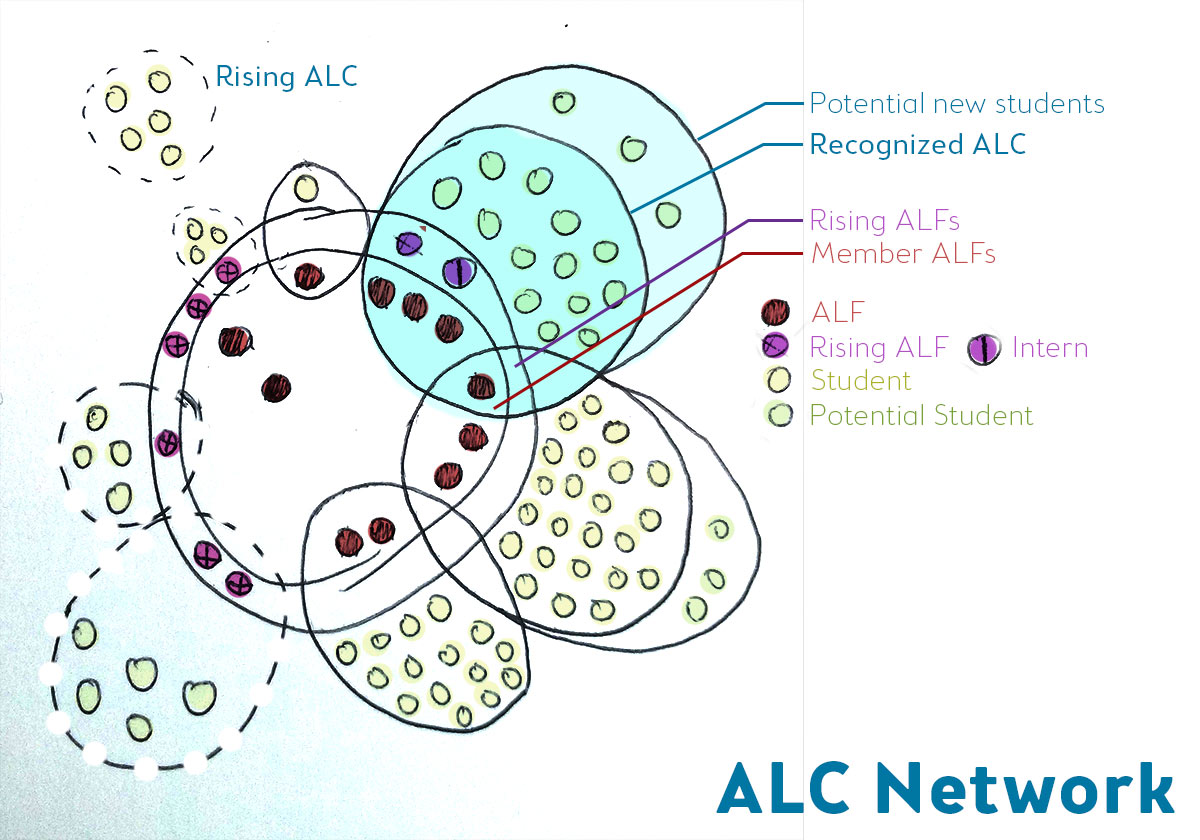 The inner ring with red dots are the ALFs. There might be more rings within this circle that signify other roles and responsibilities, all which could be granted using endorsements. If everyone endorsed me to be the Agile King, then it would be.

The outer ring of the middle circle is for rising ALFs and interns. These could possibly be sub divided into people who want to be ALFs and people who simply want to work in ALCs.

The outer circles represent the ALCs each full of students and facilitators, some of which have outer rights (or bumps) with potential (or rising) students.

The ALCs with dashed lines are rising ALCs. I’ve automatically assumed that any school without an “official” ALF is simply a rising, or potential, ALC. This is predicated on my assumption that ALFs make ALCs.

As my diagram illustrates, the ALCs are anchored to the network by the ALFs. Each ALF who is accepted becomes one more anchor point where an ALC can bind to the network.

Strengths of this process

Here are some example conditions that can be set for access to community resources.

The obvious issue here for me is negative endorsements. Publicly stating that you don’t feel that someone belongs in a group is hard and feels bad. This, I feel, can be remedied with good communication. Rather that write a negative endorsement I might go to the person in question and let them know what my issues are with them and how they can work to turn my negative feelings into positive ones.

Also creating ways of publicly and privately endorsing people might be a way to help this process.

This also doesn’t completely alleviate the issues outlined above about schisms  within our group. If we get to the point of such in-fighting it might be a sign of much larger issues. Being that we are building an open source educational methodology, we might want to take notes from the free software movement and promote forking.

If we design our resources in such a way that people can “fork” (or duplicate) our systems so as to take them in another direction, this would be ideal. We can then solve intractable disagreements by facilitating the duplication of systems for a “break away” group. This idea of forking is something I would like to explore in future posts.

I would appreciate feedback to evolve this idea. Are there any weaknesses you see in this plan? What are ways you would improve it? Please leave a comment or write another post linking back to this one with a response.