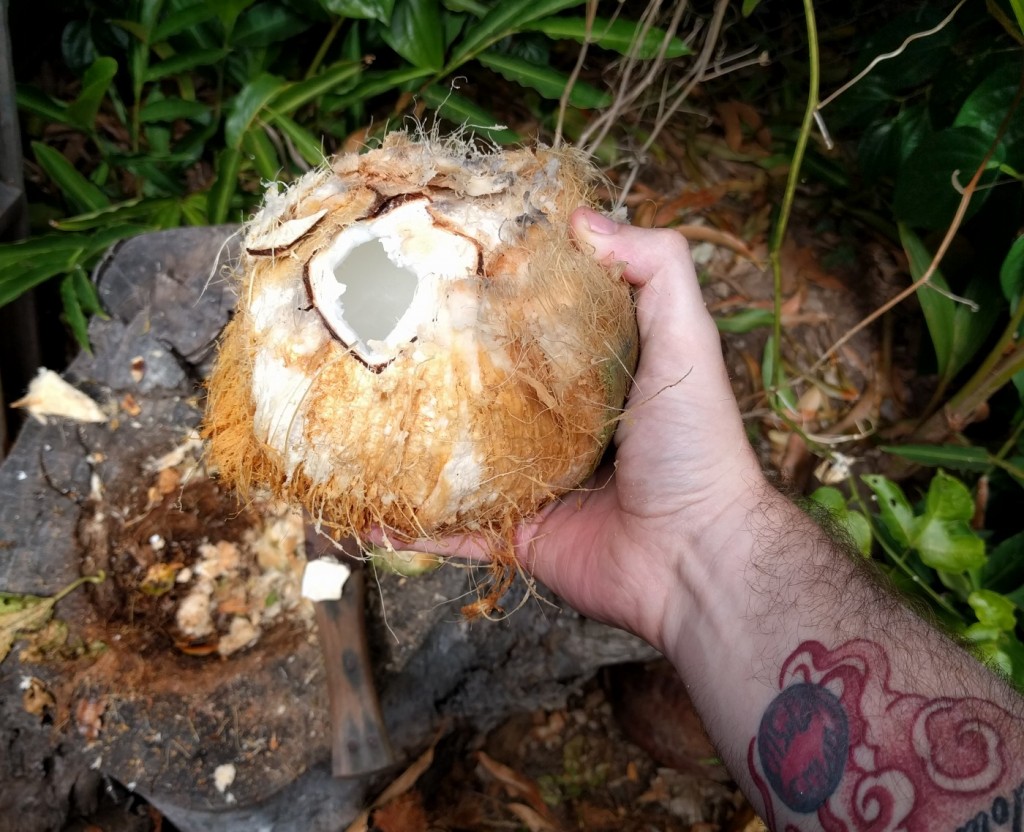 I’ve been having such a blast up in here in Waialua that I missed 2 weeks of reflective blog posts!

I started week 7 with cutting open some coconuts fresh off the tree, best water I’ve ever had. Later that day my friend Katie flew in. She is the same friend who came to Everett Washington just over a year ago!

We spent the next week adventuring around the island. Katie joined us at ALC Oahu on Monday and Tuesday we went to Ka’ena Point on the north eastern tip of Oahu. It is home to Albatross sanctuary. Kris, our friend from the DLNR (Department of Land and Natural Resources), took us out. We watered some plants to help remediate the dunes then hiked into the fenced off sanctuary.

There was a new moon that night. Lisa, Katie, Seamus, and I had a little ceremony in the back yard.

Joining us was Irene from Spain and her two year old son Liam. They were traveling around the world together and had just flown in from Australia.

The new moon was a beautiful reset and start to the week of adventures with Katie.

Over the week we went to beaches all around the island. We did some hikes, including Ka’ena point. We celebrated Katie’s birthday with Sushi AND burgers. We watched sun sets and explored with Irene and Liam. I had a really strong bond with Liam, it was fun to play with him and really helped my spanish talking to him.

On Thursday we got a real treat because the Eddie was on. This is a surf competition that takes place only when there are 60+ foot tall waves. The last time it was held was back in 2009! I don’t really know much about surfing but it was an honor to see.

A highlight was swimming at a secret beach where a sea turtle came to hang out. Katie was thrilled. It was awesome. 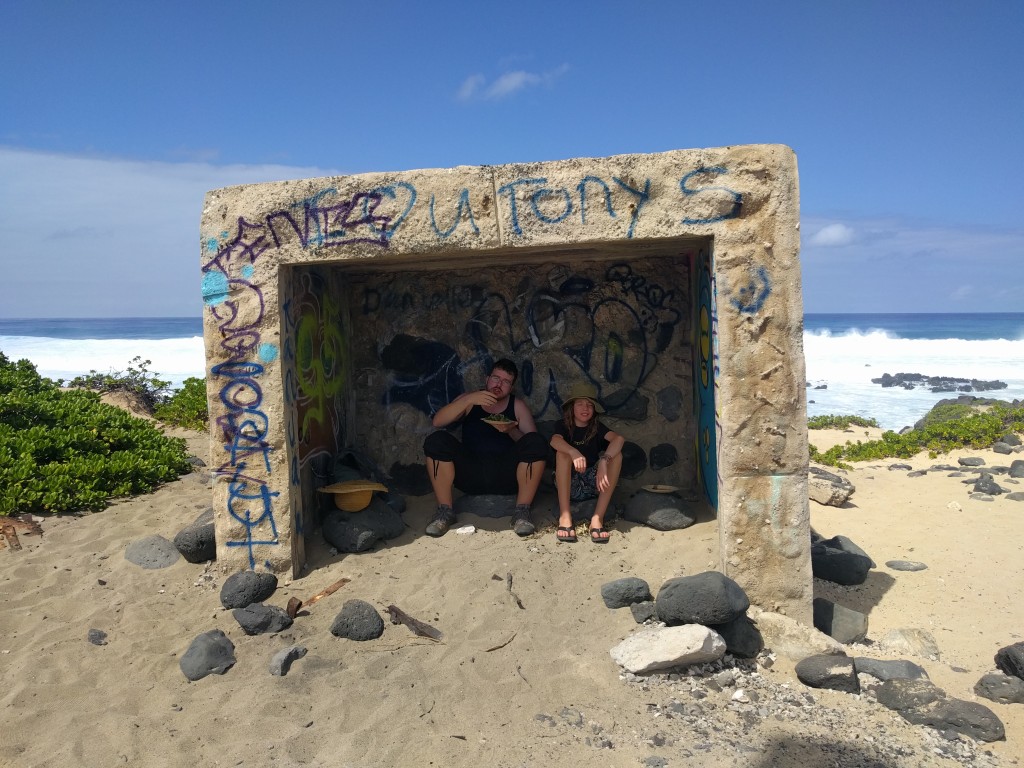 After seeing Katie off I took the next week (8) off to catch up on a bunch of client work. The ALC Network doesn’t pay me for this work and ALC Oahu doesn’t have the funds to support me so I have to earn money for food, lodging, and other expenses on my own. Lucky for me I’ve got a very marketable skill as a front end web engineer and designer. You can see more about the work I do on my other blog dru2.com tag “work”. I’m also partnered with Katie and we run a business called Radicle Vision which does much of the same work.

I’m also able to live with very little overhead. I keep my expenses low by cooking for myself and arranging inexpensive living conditions. Over the past three months I’ve spend, in total $1,933.76 which includes return air fair and some business expenses!

Sometimes keeping a low overhead means sleeping in closets or on the floor, but it’s a small price to pay for living my life exactly how I wish to live it. Often times the generosity of people keeps me well fed and housed. Right now I’m staying in a beautiful house with one of the ALC Oahu families.

This arrangement, however, has some explicit exchange elements. I am giving Lisa 24 hours (6 hours per week I’m staying) of work time to help her start a business called Paradise Foods.

I prefer to keep my agreements (bater, trade, or regular old money) explicit. This is something we promote throughout ALC and something I model in my life. Being clear about agreements saves so much potential heart ache later on. I do it with my clients but especially with my friends. It’s most important with friends because it’s very easy to take advantage of friends (more so with family) because they are going love you no matter what. With a friend a 3 night stay over can turn into a 6 night. In most cases it’s totally cool, but sometimes it’s not, and that’s when having explicit agreements really helps.

It was my birthday on Sunday. I had a low key affair, spent the morning on top of a hill in Manoa looking after Luna Ray for Lisa while she went to a woman’s circle. 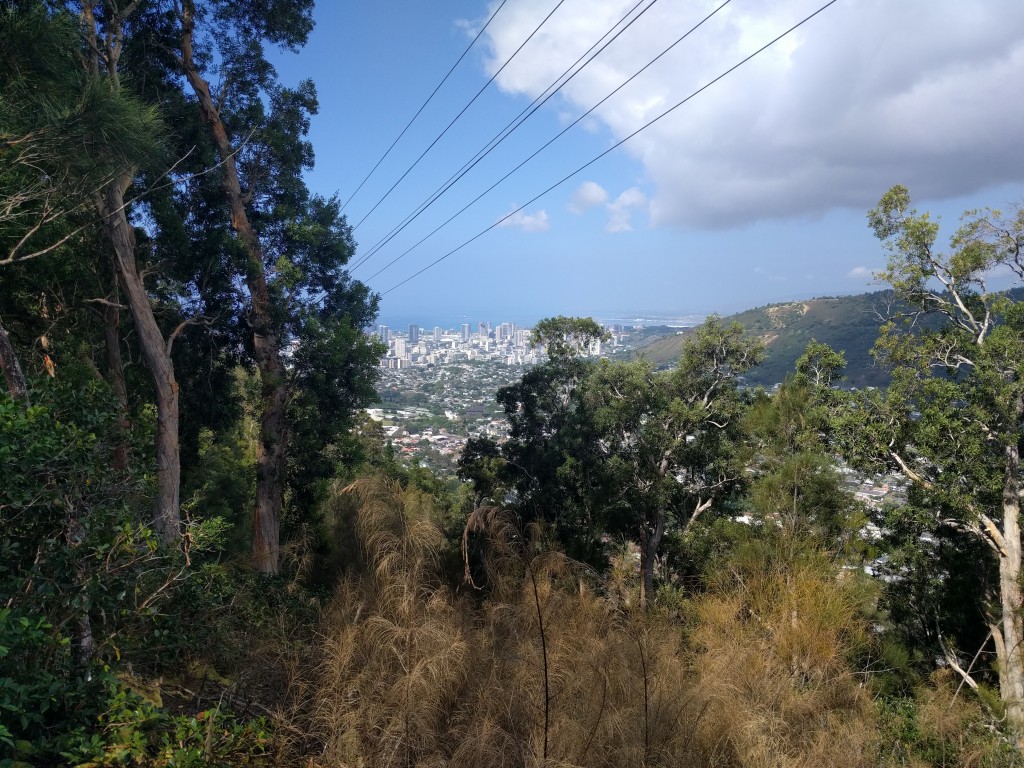 We had a great view of Honolulu. The rest of the day was full of food and relaxing.

This was a short and strange week. We said goodbye to one of our three students (@adrianna) and another one of our students were out sick. However, we had a visiting student named Tristrum. On Monday he and I went out to a nearby park to play ball and pirates. We met a boy there who didn’t speak english (much) but we were able to play non-the-less.

The next day we went to the Manoa falls, a short but fun hike ending in a water fall (or in this case a water trickle). 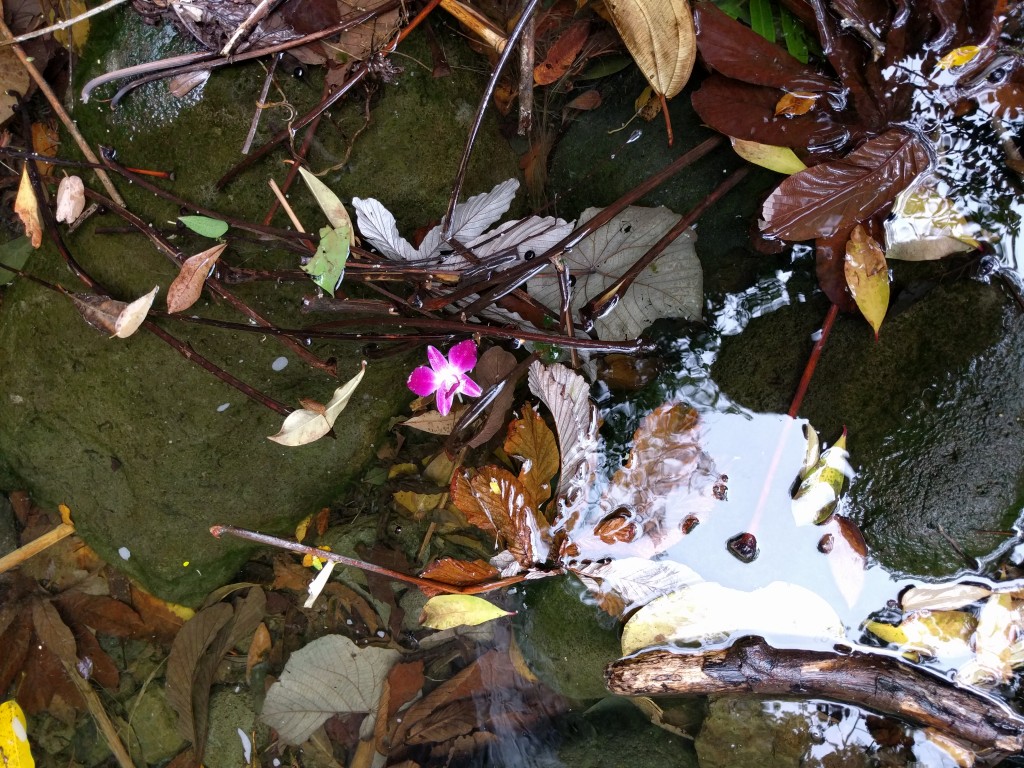 Thursday was a day off so I spent my time out on the North shore finishing up more client work. As I write this post I’m at the point in my work cycle where I’ve earned enough money to live off of for the next few months. This means I can devote more time to ALC and ALC Oahu.

I’m feeling so great. I’ve got just under a month left on Hawaii until I fly back to the east coast. It’s been a great ride so far and the next few weeks should be very exciting. There is the ALC Oahu experience following a week off where I’ll be staying in a hostel on the North Shore.