This has been my first full week at ALC Oahu. I’ve set the week, participated in morning meetings, afternoon gratitude, trips to the beach, card playing, discussions about the legacy of Martin Luther King, and much much more.

After missing the bus, then taking it in the wrong direction I was finally able to come in a little bit late after morning intention settings. We set off that day to do some “grass sledding” at a local park. @adrianna brought some cardboard and we walked to the place with hills.

It was pretty fun, I only did it a few times but everyone seemed to have fun. I made this little video:

There were some casualties, but nothing a little band-aid couldn’t fix. 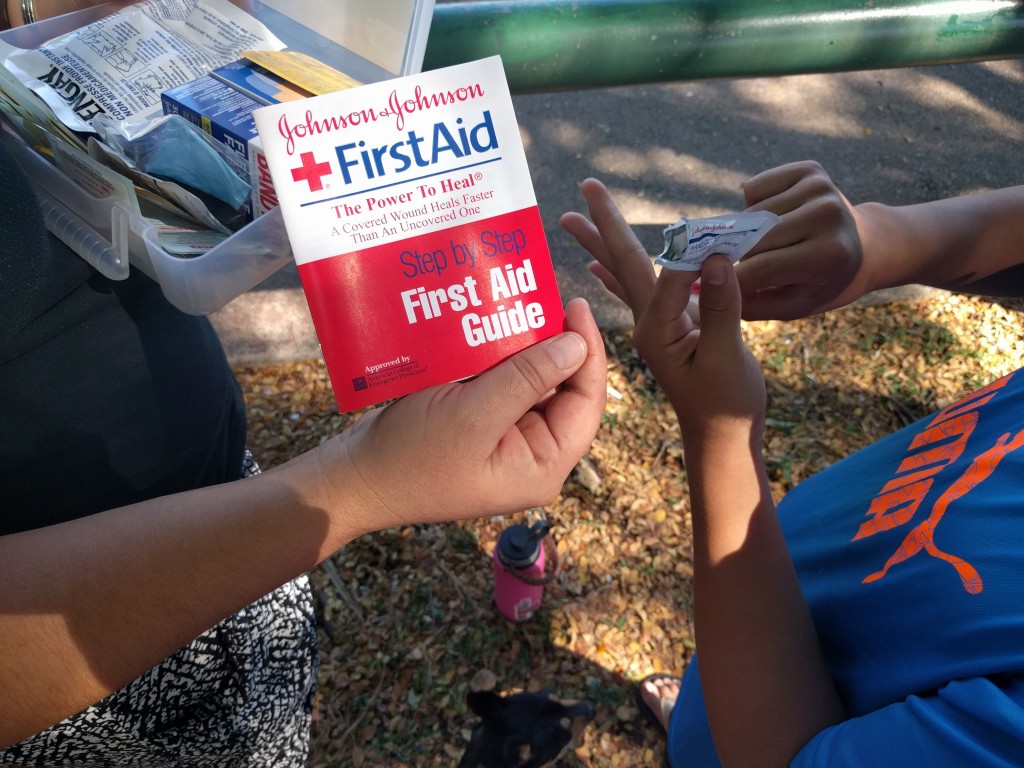 We walked around a bit more but couldn’t find any more hill suitable for sledding. Later we came back and sat down to talk about Martin Luther King (who was celebrated on Monday). We had all agreed to find information about MLK over the weekend and share it. Our discussion went over all the place, I was really impressed with the kids knowledge around MLK and current civil rights activity. We commented on how some of the same things that MLK was fighting for are still a struggle today. I shared the Black Lives Matter action on Monday that shut down the Bay Bridge.

The scene on the Bay Bridge where protesters are blocking traffic #ReclaimMLK #BlackLivesMatter pic.twitter.com/zI1X4Im4RM

We came up with a writing prompt asking: “What if segregation didn’t exist?” Here are my thoughts:

I feel that segregation is a construct created by those (few) in power to keep the many at odds with each other rather than organized. In US history race was used to discourage poor whites from organizing with black slaves against the landowning classes. So without segregation I think that we would see people organized against class structure that promote inequality, in fact we probably wouldn’t have such drastic class inequality right now. Class is something that MLK, in his later years, was becoming more focused on as I understand.

I got in very early on Wednesday because @seamus was also coming in early. I was able to get some work done on a paid project keepnhhealthy.com which has been pretty fun, I made a tool that looks up representatives based on the browser location or address search.

We started with intention settings and then jumped into long term goal setting. The focus was on work that I would be doing for ALC Oahu. We started by creating ideas then moving to position those ideas along an “importance axis” and finally to determine the major steps that it will take to complete the idea.

This was a great process because it made all the work I want to get done here seem very attainable! Plus @ninablanco and @mandyjayh can see what is on deck.

After the goal setting we left for Sand Island.

We set up on a beach near some weird ruins of rock and brick. @ninablanco said that the island was a former internment camp for Japanese Americans during WWII, later as I researched the island I learned that it was formally called Quarantine island because it was the place ships were sent if it was suspected that sick individuals were on board. So there is a bit of a dark history which is reflected in the twisted remnants of structures found scattered along the beach.

I took the oppertunity to go swimming (away from the debris) with @adrianna who had brought her mermaid tail.

It was kind of magical swimming with a little mermaid in the waters of the Pacific. It’s still sinking in that I’m actually out here in this wild and wonderful place.

After some time in the water @adrianna and I followed @seamus up a hill west of us to watch planes taking off from Honolulu Intl Airport. Seamus is an avid plane spotter and brought along a telephoto lens on his camera to snap some awesome shots. 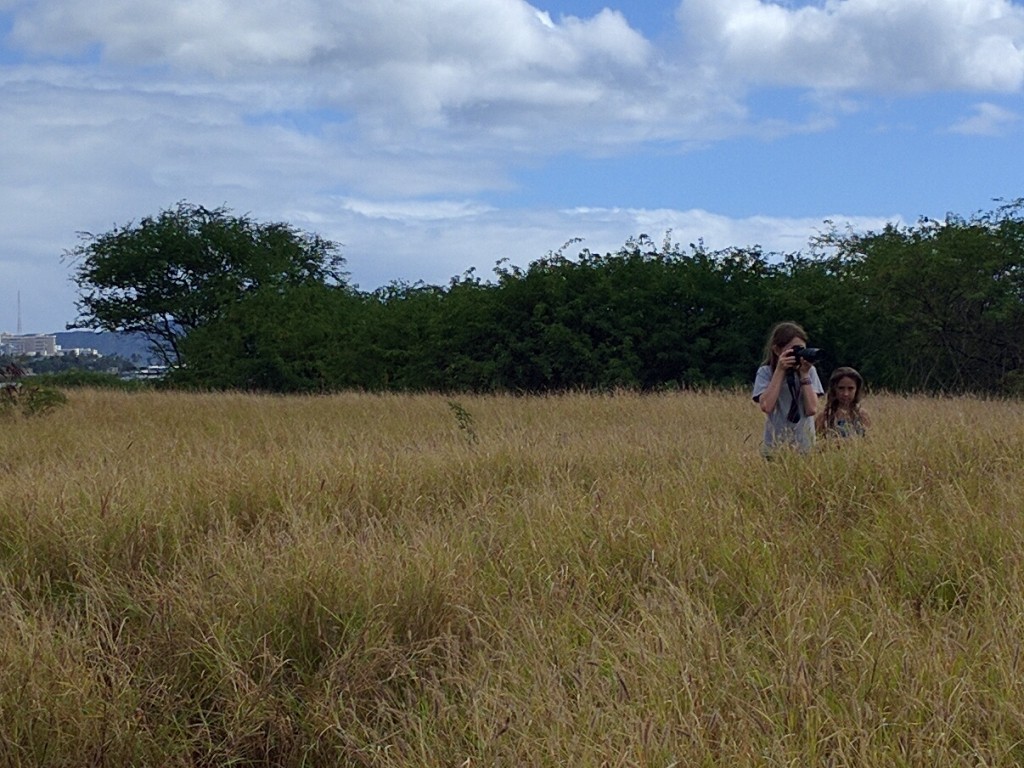 To my excitement we even saw a few warplanes flying by including two F-22 Raptors, one of my favorite jet fighters. Like Seamus I was really into jets as a teen which translates now into the ability to identify them at a great distance.

We soon left the island and quickly stopped by a local fast food place called the L & L where I had my first kalua pork and cabbage! It was really tasty.

Focused work time then gratitude circle followed by a staff check-in (as usual).

Later @ninablanco and I picked up her cousin Jen and we all went to some big fancy hotel to do a Yoga and Wine event. It was pretty funny but also really nice to see a bunch of people all being mindful of their bodies. After the yoga there were drinks (so much for being mindful of one’s body!).

Later we went to Ethiopian Love Restaurant in Chinatown. The food was amazing and I was really excited to be wearing my traditional Ethiopian scarf (pictured above) which got me a compliment from the chef! The scarf was a gift from a friend who is living out in Ethiopia working with farmers to develop permaculture techniques for that region.

After completely filling myself up to the point of being in pain I went home and slept off the food.

The final day of our ALC week was spent mostly indoors doing individual work. After our morning Change Up meeting and intention setting we moved into blogging. I blogged on the projector and explained some tips and tricks, like adding images to blogs. Once that was done (I actually didn’t finish my blog and am now writing it on Sunday!) we all took a walk to a local food stand called The Cut. 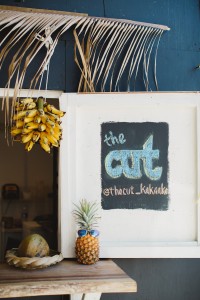 The Cut is run by this really cool local named Alex who @seamus and I met last week on our outing exploring the Kakaako neighborhood looking at murals. Alex is all about food and education around food. Where it comes from, how to cook it, and how to build community around it. I really vibe with his ideas around community and food.

When we got there it appeared the place was closed but someone noticed a person inside and we called out to him. Out popped Alex who explained he was fixing some stuff inside but had just sat down for lunch. He fixed Nina and me a bowl of amazing salad with a dressing that a friend had shared with him (talk about food and community!).

We ate and talked about potential ways to collaborate. Alex is currently getting ready for Pow Wow Hawaii, a big art fest right there in Kakaako happening early next month. After that’s done we will surely see more of him.

I hope that we can organize events that promote community, The Cut, and ALC Oahu.

The rest of the week was full of meeting with potential collaborators and hanging out with Mandy and Nina. I was able to get a good bit of outside work done and coordinate about housing for after my current situation expires.

I’m still getting settled and finding a good groove on the island. My intention to create a routine is falling flat, though there is still time. I’ve gone swimming 1/4 of the days I’ve been here, so that’s not bad! My personal cycle of intention setting and reflection is just about to settle in which I hope will put me back on track for some of my ALC Network work.

One major accomplishment over the week was the creation and launch of the ALC Summer Questionnaire (which you should fill out if you want to participate). The responses have been coming in and it’s getting me really excited about summer trainings and events. There are a lot of people out there in the world that want to play with us.